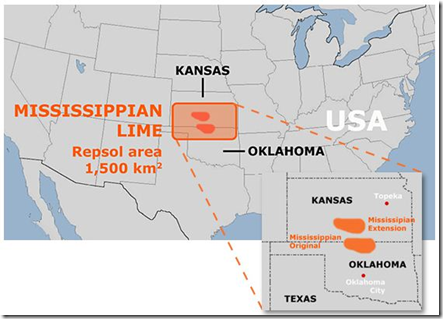 Repsol and US oil company SandRidge Energy have reached an agreement for Repsol to buy approximately 1,500 km2 (363,636 net acres) of the Mississippi Lime play, an area rich in gas and light oil. Repsol will invest $1 billion and will incorporate reserves and production from 2012.

Repsol will participate with a 16% and 25% stake respectively in two areas within the Mississippian Lime deposit, which spans the states of Oklahoma and Kansas in the USA. Repsol’s share of production is expected to reach a peak of 90,000 barrels of oil equivalent per day in 2019.

According to the agreement, Repsol anticipates drilling more than 200 horizontal wells during 2012 and exceed 1,000 wells by 2014, in a fractured carbonate-rich area of 6,900 km². Repsol will pay $250 million in cash at closing and the remainder in the form of a drilling carry, expected to be completed in three years, according to current development expectations.

Mississippian Lime has a long production history and proven resources, rich in light oil and gas produced from fractured carbonates. The area, that has been in operation for more than 30 years, has extensive infrastructure which will accelerate the start-up of production and marketing of these hydrocarbons.

The deal is part of Repsol’s strategy to diversify its portfolio into OECD countries. The company is developing in the United States various key projects contained in its Horizon 2014 strategic plan, including exploration in the Gulf of Mexico. Repsol also has activities in Alaska, and an LNG import terminal on the Canadian-US border.