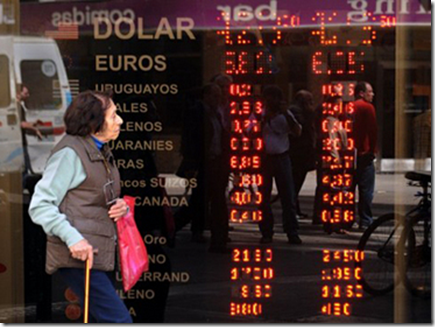 Argentina, Buenos Aires : A woman passes in front of the window of an exchange in downtown Buenos Aires on October 28, 2011. (AFP Photo / Danniel Garcia)

Exactly ten years ago Argentina suffered a full-scale financial and governmental collapse. That was the end-result of over a decade of doing exactly what the IMF, international bankers, rating agencies and global “experts” told us to do.

It all began getting really ugly in early 2001 when De la Rúa could no longer service Argentina’s “sovereign debt” even after driving the country into full “deficit zero” mode, slashing public spending, jobs, health, education and key public services.

By March 2011, he had brought back Domingo Cavallo as finance minister, a post Cavallo had already held for six years in the nineties under then-President Carlos Menem, imposing outrageous IMF deregulation and privatization policies that weakened the state and led straight to the 2001 collapse.

Well, it wasn’t really De la Rúa who brought back Cavallo but rather David Rockefeller (JPMorgan Chase) and William Rhodes (CitiCorp), who personally came to Buenos Aires to tell/order President De la Rúa to name Cavallo… or else!

So, by June 2001, Cavallo – a Trilateral Commission member and Soros-Rockefeller-Rhodes protégé – tried to allay a default by engineering a new sovereign debt bond mega-swap which increased public debt by $51 billion, but did not avert total collapse that December.

What then? De la Rúa and Cavallo protected the bankers, avoiding a massive run on all banks by freezing all bank deposits. “Corralito” they called it – “the crib” – whereby account holders could only withdraw 250 pesos per week (at the time, equivalent to $250; after the 2002 devaluation, equal to $75).

Argentina’s economy all but collapsed; people took to the streets banging pots and pans, screaming and yelling, calling all bankers ‘thieves, criminals, crooks, swindlers and robbers’ but… the big mega-bank bronze gates all remained tightly shut. No one got their money back.

Clearly,this was a massive banker-orchestrated, government-backed robbery of the assets and savings of 40 million Argentinians.Half our population quickly fell below the poverty line, GDP contracted by almost 40% in 2002, millions lost their jobs, their savings, their homes to foreclosures, their livelihoods and yet… not one single bank folded or collapsed!

Amid rioting in Buenos Aires and major cities and brutal police repression that left 30 dead on the streets, De la Rúa boarded his helicopter on the rooftop of the “Casa Rosada” presidential palace and abandoned ship. That last week of December 2001, four presidents successively went by until finally the bankers, the media, and the US State and Treasury Departments accepted Eduardo Duhalde as provisional president. He finally named finance minister Roberto Lavagna, a founding member of the local CARI, the Argentine Council on Foreign Relations, which is the local New York CFR branch.

Argentina was used as a testing ground by the global power elite to learn how a full-scale financial, monetary, banking and economic collapse can be controlled and its social consequences suitably engineered to ensure that, with time: (a) the bankers came out unharmed, (b) “democratic order” is re-instated and the new government imposes another sovereign debt mega-swap, balance their numbers, and calm the people down (or else!), and (c) put big smiles back on bankster faces…Business as usual!

The lessons learned in Argentina in 2001/3 are today being used in Greece, Ireland, Spain, Italy, Iceland, the UK and the US.

So, “Occupy Wall Street” demonstrators, lend me your ears! You haven’t got a chance! The global money masters already made their financial war game exercise in Argentina.

At one point it got so bad that New York Times journalist Larry Rohter (later alleged by the Brazilian government to have ties with the CIA) had the gall to suggest the territorial break-up of Argentina to “solve” our debt crisis. The title of his perverse article, published on 27 August 2002, said it all: “Some in Argentina see secession as the answer to economic peril”, specifically targeting our natural resources-rich Patagonian region…

Then, the global power elite finally got their man when Néstor Kirchner became president in May 2003. Kirchner retained the finance minister, Lavagna, engineered yet another sovereign debt mega-swap running 42 years into the future (!); he paid the IMF the full amount they claimed of $10 billion (in cash, in dollars and with no deductions; i.e. absolutely most-favored creditor status!) getting nothing in return; he further weakened Argentina’s military, dumbed-down education, media and culture, and ended up imposing his wife Cristina as successor.

Clearly, lots of lessons were learned from the “Argentine experience,” which come in so handy when dealing with those rowdy, poorer Europeans today.

So, one decade on…. anyone for a tango? Adrian  Salbuchi

Comments Off on Soros-Rockefeller-Rhodes protégé – tried to allay a default by engineering a new sovereign debt bond mega-swap. 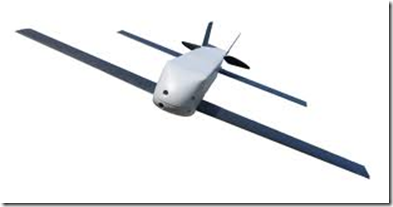 New regulatory recommendations expected to be released by the Federal Aviation Administration soon could allow oil-and-gas companies to purchase light-weight unmanned drones akin to those used by the military.

Energy companies already use remotely operated vehicles to monitor and manipulate wells at extreme underwater depths, and unmanned aircraft companies hope that in the coming years, companies will be able to hire or buy aerial drones to survey pipelines, check on hard-to-reach parts of platforms and gather information after an offshore accident occurs.

The current federal regulations were first introduced in 2007, as production and development of unmanned aerial systems began to grow. The proposed regulation changes, which will be released in a few weeks, will be subject to a comment period and review, a process that generally takes 12 to 18 months.

“The concerns about these unmanned aerial systems, whether they’re operating in the Gulf of Mexico or over land, remain the same,” said FAA spokesman Lynn Lunsford. “We want to make sure that they’re used in such a way that the safety of other aircraft is not compromised.”

That could be particularly challenging in the Gulf, where, according to Lunsford, planes and helicopters traveling back and forth to offshore rigs make more than 800 trips per day.

California-based AeroVironment already had agreements with several oil-and-gas companies just before the 2007 regulations were introduced, according to Steve Gitlin a vice president at AeroVironment.

“We’re ready,” he said. “As soon as the FAA says ‘Go,’ we’re ready to provide capabilities to the customers who want it. These aerial systems will save money, save lives and allow for more effective use.”

Lindsay Voss, senior program development manager at the Association for Unmanned Vehicle Systems International, said that the FAA’s longtime complaint is that it needs more data, like a complete picture of the drone accident rate.

“You could say there’s a lot of operational time with Department of Defense,” she said. “We probably have about 6,000 hours a year in Iraq and Afghanistan. But it’s difficult to take that info and apply it to national airspace.”

Voss said several companies that operate in the Gulf of Mexico, including Shell, BP and ConocoPhillips, have expressed interest in the technology.

BP spokesman Daren Beaudo said the company has been an industry leader in developing ways to deploy drone technology for pipeline inspection.

“We have been working cooperatively for over five years with other members of the oil-and-gas industry, the aviation industry and the FAA to enable eventual deployment of drones to assist us in leak and machinery threat detection once (new FAA) regulations are in place.”

Currently, BP and other companies use manned helicopters to survey their pipelines. But helicopters can run about $300 an hour, while renting a lightweight drone can cost as little as $20 an hour, said Voss.

Drone makers say their machinery has a range of applications beyond pipeline surveillance as well.

“The color and infrared video could be very useful if they want to check out the condition of an offshore platform. If there’s a disaster, people tend to be evacuated from a platform, but the operator will still want to have eyes on the target,” said Gitlin. “We’ve done some demos for offshore oil companies in the past and, using infrared, were able to detect oil slick in the water.”

Kevin Lauscher, who does industrial sales for the Canadian company Draganfly Innovations, said that in the past year, he’s already sold some drones that weigh less than 10 pounds for deepwater oil platforms in the Gulf of Mexico.

“They’re used for inspectional purposes. It gives them the ability to more easily view platforms, rather than putting people on cranes or scaffolding as they’ve had to do in the past.”

“Safety has been brought to the forefront as a result of that,” he said.

Voss said that it could be a few years before drones under 50 pounds are flown over domestic waters.

“They’re still at the very beginning of this process,” she said. “It doesn’t look like the rule will be out until 2014. After that, I think we’ll start to see a pick up, but it’s still going to depend on how things go after the agencies put out the rule.”

Staff Writer Cara Bayles can be reached at 857-2204 or at cara.bayles@houmatoday.com. 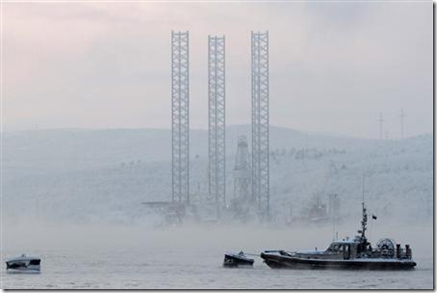 (Reuters) – An oil drilling rig with 67 crew on board capsized and sank off the Russian Far East island of Sakhalin when it ran into a storm while being towed, and 51 of the crew were unaccounted for, Russian news agencies reported on Sunday.

Fourteen crew members were rescued alive from the ‘Kolskaya’ jack-up rig, operated by Russian exploration company Arktikmorneftegazrazvedka, two bodies were recovered and the rest of the crew were missing.

“According to reports from the scene of the rescue operation, the Kolskaya platform has sunk completely,” the local head of the Emergencies Ministry, Taimuraz Kasayev, told a news briefing in Yuzhno-Sakhalinsk.

Agencies quoted officials as saying the rig capsized at about 0200 GMT on Sunday around 200 km (125 miles) off the coast of Sakhalin as it was being towed from the eastern peninsula of Kamchatka.

It appeared that the vessel had not been doing drilling work, so no oil spill was likely. The rig’s destination was not immediately clear.

While less serious that BP’s Macondo disaster, when a blowout caused oil to spew for months into the Gulf of Mexico, the fatal accident will deal a blow to Russia‘s efforts to step up offshore oil and gas exploration.

Russia has two major offshore projects that are already producing oil off Sakhalin – Sakhalin-1, operated by Exxonmobil and Sakhalin-2, in which state-controlled gas export monopoly Gazprom has a controlling stake.

State-controlled Rosneft this year reached a major deal with Exxon to explore for oil and gas in the Arctic Kara Sea.