US plan to deploy combat ships in PH spark protest 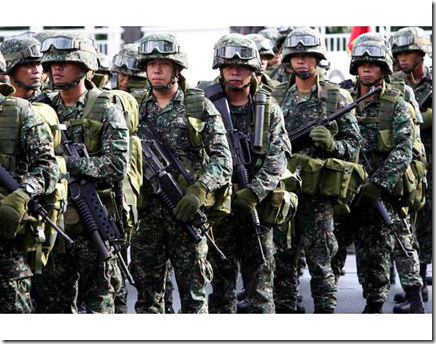 MANILA, Philippines-The alleged plan of US President Barack Obama to deploy combat ships in the Philippines to offset China’s growing military presence in South China Sea and the Southwast Asian region sparked outrage among groups in Manila highly critical of US military aggression and intervention.

The left-leaning fisherfolk alliance Pambansang Lakas ng Kilusang Mamamalakaya ng Pilipinas (Pamalakaya) on Saturday protested what it called an upcoming intervention in Manila as they urged Philippine President Benigno Simeon Aquino III to clarify reports about a US plan to station American combat ships in the disputed Spratlys group of islands.

Pamalakaya national chair Fernando Hicap cited an online report published by Interkasyon, the website news of ABC 5 which said the US Navy is planning to deploy combat ships in Singapore and in the Philippines to check China’s threatening presence in Spratlys.

“President Aquino should tell all about this US military project in Spratlys. Is he aware of this upcoming deployment of Washington combat ships inside the territorial waters of the Philippines? Did he agree with this military escapade of US President Barack Obama? What is the real score Mr. President,” asked Hicap in a press statement.

The Pamalakaya leader also asked officials of the Department of Foreign Affairs (DFA) in Manila to shed light on the report, which Hicap said is a direct affront to the country’s national sovereignty.

Hicap said the report likewise merits a full-blown congressional inquiry by the Philippine Senate and the oversight committee of the Visiting Forces Agreement (VFA), saying the deployment of combat ships is tantamount to allowing Washington to use the country as a launching pad to attack countries which the US categorized as rival powers like the China and other nations highly critical of American interests in Asia and the Pacific.

The report said regional defense analysts said the ships were small, but agreed the symbolism of the moves, which come after Washington announced it was increasing its engagement in Asia, would upset Beijing.

Last November, the United States and Australia announced plans to deepen the U.S. military presence in the Asia-Pacific region, with 2,500 U.S. Marines operating out of a de facto base in Darwin in northern Australia.

A report published by the U.S naval Institute said in coming years, the U.S. Navy will increasingly focus on the strategic “maritime crossroads” of the Asia-Pacific region, Chief of Naval Operations Admiral Jonathan Greenert wrote in the December issue of Proceedings.

The plan highlights the deployment of several of US newest littoral combat ships at Singapore’s naval facility and will help the American navy sustain its global forward posture with what may be a smaller number of ships and aircraft than today.

Greenert described littoral combat ships as shallow draft vessels that operate in coastal waters and can counter coastal mines, quiet diesel submarines and small, fast, armed boats. Greenert admitted the ships would focus on the South China Sea, conducting operations to counter piracy and trafficking, both of which are endemic in the area.

Defense experts argued that the disputed ownership of the oil-rich reefs and islands in the South China Sea is one of the biggest security threats in Asia. The sea is claimed wholly or in part by China, Taiwan, the Philippines, Malaysia, Vietnam and Brunei.

They agreed that the shortest route between the Pacific and Indian Oceans, it has some of the world’s busiest shipping lanes. More than half the globe’s oil tanker traffic passes through it.

At a regional summit held in November, US President Obama told Chinese Premier Wen Jiabao that the United States wanted to ensure the sea lanes were kept open and peaceful. But Jiabao lashed back declaring “outside forces” had no excuse to get involved in the complex maritime dispute, a veiled warning to the United States and other countries to keep out of the sensitive issue.