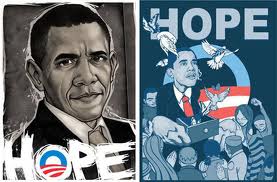 If U.S. history is a painting on a giant canvas, President Barack Obama’s speech this week in Osawatomie, Kansas, is a thick coat of whitewash layered all over it, and the failure of the last three years lies underneath. The President’s pretense is that, no, it’s not Obamanomics that has caused persistent unemployment, stunted growth and record deficits–it’s supply side economics!

The President’s speech was a naked portrayal of his vision of America–one where inequality runs rampant, where the American dream is nearly dead, where the rich oppress the poor, where education is undervalued. As Charles Krauthammer observes this morning in The Washington Post, “That’s the kind of damning observation the opposition brings up when you’ve been in office three years.”

Indeed, what was glaringly absent from the President’s portrait was the fact that his economic policies have failed to put Americans back to work and his absolute inability to lead Washington toward combating rampant government spending. His solution, moreover, was more of the same stuff that has failed spectacularly for him: government as the great savior.

But in President Obama’s mind, it is others who offer ideas that don’t work, not him. He points to “a certain crowd in Washington” that argues for tax cuts and reduced regulations, calling it “a simple theory” that “fits well on a bumper sticker” but “has never worked.”

Correction, Mr. President. It has worked–time and time again throughout history. The trouble is, Mr. Obama has never tried it, and the Keynesian economic policies he enacted fell flat on their face, just as they have throughout history.

It started with a massive $787 billion stimulus bill that White House economists predicted would create (not merely save) 3.3 million net jobs by 2010. It was Keynesian economics at its finest, based on the premise that government spending would spark demand and put Americans back to work.

It didn’t. Some 13.3 million Americans remain out of work, the unemployment rate has hovered between 8 and 10 percent throughout Obama’s presidency, and economic growth has been stuck on slow. In fact, today America is witnessing the longest stretch of such high unemployment in the postwar era. Meanwhile, job creation has hit a record low, as Heritage’s James Sherk explains:

Yet despite these numbers — and the fact that President Obama had near-free rein to enact the Keynesian economic policies he saw fit — the President is now demagoguing the one economic policy he hasn’t tried — supply-side economics — while calling for more government spending all as America’s debt is deepening. He would do better to study history and get a grasp of how cutting taxes and freeing the market has worked when employed by both Democrats and Republicans.

Lowering tax rates, thereby allowing people to keep and invest more of the money that is rightfully theirs, has proven good for the economy time and time again. In the 1920s, 1960s, and 1980s, tax rate reductions resulted in faster growth, rising incomes, and more job creation. And despite the President’s claim that cutting taxes only helps the rich, when tax rates were lowered in those decades, higher-income Americans paid an even greater share of the tax burden because they had fewer reasons to hide, shelter, and under-report income. But if taxes are increased — as President Obama continues to threaten — the price of working, saving, investing, and taking risks goes up, too.

History bears this out. Daniel Mitchell writes that in the 1920s, under Presidents Warren Harding and Calvin Coolidge, the top tax rate was reduced from 73 percent to 25 percent. The result? The economy expanded, growing by 59 percent between 1921 and 1929, with annual economic growth averaging more than 6 percent. Under President Kennedy, the top rate dropped from 91 percent in 1963 to 70 percent by 1965. The result? Between 1961 and 1968, the economy expanded by more than 42 percent, with average annual growth of more than 5 percent. Under President Reagan, the top tax rate fell from 70 percent in 1980 to 28 percent by 1988, leading to incredible economic expansion and average growth of nearly 4 percent. Finally, in the six quarters following the 2003 tax cuts, the GDP’s growth rate shot up to 4.1 percent from 1.7 percent before.

But the President doesn’t have to take The Heritage Foundation’s word for it. He can heed the words of President Kennedy in his 1962 speech to the Economic Club of New York:

Our true choice is not between tax reduction, on the one hand, and the avoidance of large federal deficits on the other. It is increasingly clear that no matter what party is in power, so long as our national security needs keep rising, an economy hampered by restrictive tax rates will never produce enough revenues to balance our budget just as it will never produce enough jobs or enough profits.

Unfortunately, President Obama does not appear open to advice, nor does he seem cognizant of history–be it that of 10, 20, 40, or 90 years ago, or even his experience of the last three years. Instead, he is damning the torpedoes and continuing to pursue a liberal, progressive agenda that has proven to be a failure. As they have for the past three years, Americans will pay the price.