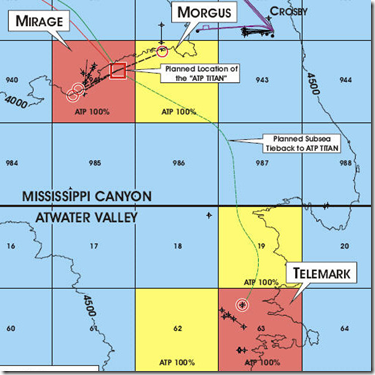 Mirage/Morgus
Phase I of the project focuses on the northern part of the greater Telemark area, which includes the Mirage and Morgus fields.
Located on Mississippi Canyon Block 941 in a water depth of 3,800 feet (1,158 meters), the Mirage field was discovered in 1998 when a well encountered roughly 87 feet (27 meters) of hydrocarbons in two sands. The Morgus field is located on Mississippi Canyon Block 942 in 4,304 feet (1,312 meters) of water, and was discovered when drilling encountered approximately 55 feet (17 meters) of net pay.
In an effort to cut costs, ATP decided to jointly develop these fields due to their close proximity. Combined, Mirage and Morgus hold estimated recoverable reserves of 190 Bcf (5 Bcm).
In 2008, the West Sirius semisub drilled three wells on the Mirage and Morgus fields and reached a total depth of 5,900 feet (1,798 meters) in 3,927 feet (1,197 meters) of water.
To develop the Mirage field, Technip received a contract for the flowlines, risers, jumpers and subsea structures. The contract covered engineering for the installation, welding and installation of two steel catenery risers and two oil and gas export flowlines; fabrication and installation of subsea structures and jumpers and pre-commissioning of the project.
Mirage is operated by ATP, which owns a 25% interest; Statoil owns the remaining 75% interest. Morgus is operated by ATP, but Statoil owns 100% of the interest.
Telemark
Phase II of the project focuses on the Telemark field. Telemark is situated in a water depth of 4,300 feet (1,311 meters) on Atwater Valley Block 63. ATP acquired the field in 2006 and owns 97% interest; BHP Billiton holds 1% interest; Chevron holds 1% interest; and Eni holds the remaining 1% interest.
The field was discovered in 2003 in the southern part of the greater Telemark area when exploratory drilling encountered 140 feet (43 meters) of hydrocarbons in the Miocene sands. The Telemark field was deemed commercially viable shortly after, and ATP began field development preparations.
Situated 7 miles south of the Mirage and Morgus fields, Telemark originally was designed to have its own production hub, a MinDOC II, but the company decided to tie-back the field’s subsea well to the ATP Titan, as well. This development will result in an increase in production rates through ATP Titan in 2010 and 2011.
In May 2009, Bluewater Industries received a contract for the field’s development. The contract covers the design and manufacture of one high-pressure flexible riser measuring 2 miles (3 kilometers) long, and engineering for the installation and welding of one oil and gas production flowline approximately 13 miles (21 kilometers) long. The contact also includes installation of a flowline and associated riser with an option to install an umbilical; fabrication and installation of subsea structures and a jumper; and pre-commissioning of the project.
ATP Titan
In 2007, ATP decided to develop the Telemark area with a floating, drilling and production triple-column spar, the ATP Titan, since accessible infrastructure wasn’t nearby. The MinDOC, a deep draft floating platform, is comprised of three columns linked by pontoons, boasting a higher load capacity and enhanced stability than previous designed semisubmersibles or spars.
In 2007, construction of the ATP Titan MinDOC commenced with construction slated to end in the third quarter of 2009. The facility has a design capacity of 25 Mbopd and 60 MMcf/d (2 MMcm/d) and incoporates six dry tree wellheads with three pairs of future subsea flowlines. Mustang Engineering received a contract to provide detailed engineering and procurement support for the topsides production facilities on the ATP Titan.
Towards the end of 2009, ATP Titan was moored at the Mirage and Morgus fields to complete the drilling of three wells to vertical depths of 14,500 to 17,250 feet (4,420 to 5,258 meters). The vessel will serve as the production platform for the life of the fields’ reserves. Then, ATP Titan will move to the Telemark field to recover its remaining reserves once the vessel has finished producing from the Mirage and Morgus fields.
First production from the Telemark Hub commenced on March 28, 2010, and the vessel has an estimated life span of 40 years.
Future Exploration
A fourth field that is 100% owned and operated by APT — Oasis — is located on Mississippi Canyon Block 943, and may be tied-back to the platform, pending exploration results.