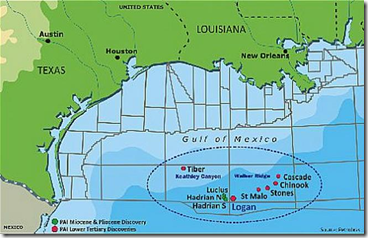 The Logan discovery is approximately 400 km (250 miles) southwest of New Orleans, at a water of around 2,364 meters (7,750 feet). The discovery was made by drilling operations of well WR 969 #1 (Logan #1), in block WR 969. Further exploration activities will define Logan’s recoverable volumes and its commercial potential.

Statoil is the consortium’s operator, with 35% stake. Petrobras America Inc. (a subsidiary of Petrobras headquartered in Houston, Texas) holds 35% of the stake, while Ecopetrol America and OOGC hold 20% and 10%, respectively.

Petrobras in the Gulf of Mexico

As a world leader in deepwater operations, Petrobras benefits from the experience and technology the company developed in its offshore operations in Brazil.

In the Gulf of Mexico, Petrobras is the operator of Cascade (100%) and Chinook (66.7%) oilfields and holds stakes in the Saint Malo (25%), Stones (25%) and Tiber (20%) discoveries, all with significant oil reserves in the Lower Tertiary. Additionally, Petrobras has stakes in the very recent Hadrian South (23.3%), Hadrian North (25%) and Lucius (9.6%) discoveries, all with significant oil reserves and in the Mio-Pliocene.

Petrobras holds other exploratory concession areas in this region, which will be tested later on, growing the Company’s operations in the Gulf of Mexico.