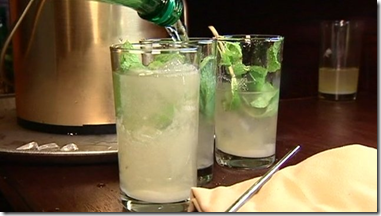 Tucked inside the Swiss Embassy, the cocktail area celebrates the writer who made his home in CubaCuban and American politicians have celebrated together at the opening of Hemingway’s, an invitation-only bar located in a Washington, DC embassy.

It started like a typical Washington DC function. Men and women in dark suits milled around a formal room in the Swiss Embassy, crystal chandeliers sparkling overhead. Waiters carried around glasses of red and white wine while guests made polite small-talk.

But after a series of speeches, guests were led to the back of the room, and into an entirely different experience.

They had entered Hemingway’s, a bar celebrating the American writer who made his home in Cuba. There, the floors were covered in terracotta tile, while wooden fans whirred above. Bartenders poured cocktails under a brass replica of Hemingway’s signature.

Aside from the fact that it serves liquor, Hemingway’s isn’t a bar in the traditional sense. Tucked inside the embassy, where the Cuban Interests Section resides, the bar has a strict invitation-only list.

It will be used for entertaining guests of the Interest Section, so tourists hoping to catch happy hour are out of luck.

It’s illegal for the bar to conduct any commerce, but the embassy is free from the trade embargo that forbids importing products from the communist country. So drinks were on the house, made with Cuban rum that’s normally impossible to find in the US.

Mr McAullife, who travelled to Cuba last year as part of a trade mission, thinks that doing more business with Cuba could be a key to creating American jobs.

“It’s a huge market, and every other country in the world is already there,” he says. “And Cubans love American products.”

From Versailles to Havana

But the opening of the bar wasn’t simply about facilitating Cuban-American commerce.

Instead, the night was more about celebrating Ernest Hemingway, described as a “cultural bridge” by Jennifer Phillips, the grand-daughter of Hemingway’s editor. Ms Phillips is co-founder of the Finca Vigia foundation, devoted to preserving Hemingway’s Cuban home.

She spoke before the opening of the bar, reminding the audience that Hemingway is treasured by both nations.

Neither the US nor Cuba have official embassies in the other’s country; instead both have Interests Sections located in the Swiss embassies.

Neither group has a history of being particularly friendly towards the host nation, though Cuba-watchers hope that Hemingway’s signals a positive change.

When the Interest Section in DC was due for a renovation, the Cuban diplomats decided to reclaim a bit of the space as their own.

“The room was like the palace of Versailles,” says Juan Leon Lamigueiro, deputy chief of the diplomatic mission. “There was very little Cuban.”

“So we decided to convert the warehouse annex into a bar dedicated to Hemingway.”

While mojitos and Cuba Libras were being poured in the small back room that houses the bar, a 12-piece band played Latin music in the front of the hall.

A mural promoting Fidel Castro displayed prominently at the entrance of the embassy.

Sandra Levinson, resplendent in a sparkling black and blue blouse, spun and twirled with her partner. MS Levinson, executive director of the Center for Cuban Studies in New York City and director of the centre’s Cuban Art Space, learned to dance during her many trips to Cuba, and had travelled down to Washington specifically to attend the opening.

As the crowd subsided, the hosts brought out cigars – the famous commodity that is forbidden in the US.

Reporters, bureaucrats, and Cuban emigrants happily puffed away – but more than one skittish politico declined to have their pictures taken enjoying Cuban contraband.

“You can write this,” one conceded. “An anonymous Hill staffer said the mojitos were fantastic.”