Deepwater Millenium Drillship Not Moving to Brazil. Stays in Ghana 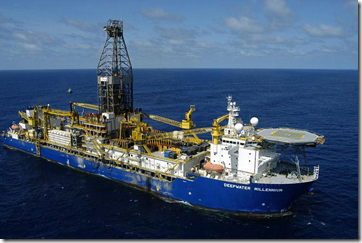 An ultra-deepwater rig leased by Anadarko Petroleum Corp is no longer heading to Brazil, according to rig owner Transocean Ltd . A source familiar with the matter said last month that Anadarko was considering the sale of some assets in Brazil, which include some deepwater prospects.

Transocean said on Monday its Deepwater Millennium rig would now remain off Ghana at a rate of $576,000 per day through this month, with the rest of its Anadarko contract through July 2013 now up in the air.

“Subsequent operating location is yet to be determined, and the dayrate under the contract could change depending on the country of future operations,” Transocean said in its latest fleet status report.

The Millennium had been set to move to Brazil in July to work on a daily rate of $561,000, according to Transocean’s July fleet status report.

The Switzerland-based rig contractor also said on Monday its midwater rig, Actinia, would move from Malaysia to India to work for ONGC next May, on a three-year contract with a dayrate of $190,000.

Finally, a previously idle Transocean shallow-water rig, the Harvey H. Ward, will start work next month for Pertamina off Indonesia on a $97,000-per-day deal running to May 2013.