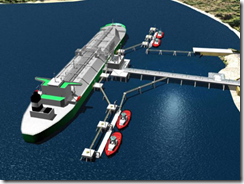 ”The Kitimat LNG project represents a remarkable opportunity to open up Asia-Pacific markets to Canadian natural gas and we’re leading the way in being able to deliver a long-term, stable and secure supply to the region,” said Janine McArdle, Kitimat LNG President. “This export licence approval is another major milestone for Kitimat LNG as we move forward and market our LNG supply. LNG customers can have even more confidence in a new source of supply.”

“Today marks a historic day for Canada’s natural gas industry and this is fantastic news for our project and the communities where we operate. Kitimat LNG will bring revenues and jobs and the associated benefits to Canada,” said Tim Wall, Apache Canada President. “The Kitimat LNG partners are very pleased with the NEB’s approval of our export licence and we’d like to thank them for their support and confidence in the project.”

The Kitimat LNG export facility is planned to be built on First Nations land under a partnership with the Haisla First Nation.

The facility will be served by Pacific Trail Pipelines Limited Partnership’s natural gas pipeline which will run from Summit Lake to Kitimat. The 463-kilometre underground line will provide the terminal with a direct connection to the Spectra Energy transmission pipeline system and excellent access to natural gas supplies in British Columbia.

Kitimat LNG is currently carrying out a Front End Engineering and Design (FEED) study which will provide certainty around project design, construction timelines and costs and labour force requirements. The FEED study is expected to be complete by early in 2012 followed by a final investment decision by the partners.

About the Kitimat LNG facility and the PTP Pipeline

Apache Canada, EOG Canada and Encana plan to build the Kitimat LNG facility on IR#6 Bish Cove, approximately 650 kilometres (400 miles) north of Vancouver. The facility is planned to be built on First Nations land under a unique partnership with the Haisla First Nation. The initial phase of the facility has a planned capacity of approximately 5 million metric tonnes of LNG per annum or the equivalent of nearly 700 million cubic feet per day. PTP is planning to build a 463-kilometre (287-mile), 914-mm (36-inch) diameter underground line from Summit Lake, B.C. to Kitimat. Pacific Northern Gas Ltd. (PNG) will operate and maintain the planned pipeline under a seven-year agreement with Apache Canada, EOG Canada and Encana, with provisions for five-year renewals.