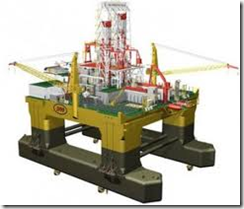 HAVANA,  (Reuters) – A new, Chinese-built drilling  rig was expected to depart Singapore yesterday or later this  weekend on its way to Cuba where it will be used to usher in a  new era in offshore oil exploration for the communist-led  island.

The Scarabeo 9, owned by Italian oil giant Eni SpA’soffshore unit Saipem and contracted in Cuba by Spanish oil firm  Repsol YPF, was anchored in Singapore and ready to leave on  what an Eni spokesman said would be an 80-day voyage.

A Western diplomat in Havana said the rig would stop in  South Africa and Brazil before reaching Cuba in November, with  the expectation it will start drilling shortly after arrival.

Oil experts on the island say Cuba may have 20 billion  barrels of oil in its still-untapped portion of the Gulf of  Mexico, although the U.S. Geological Survey estimates reserves  are a more modest 5 billion barrels.

Repsol drilled a well in Cuban waters in 2004 and found oil  there, but for various reasons, including the longstanding U.S.  trade embargo against the island, has not drilled again.

For Cuba, a big oil find will give its struggling economy a  boost and reduce or eliminate its dependence on oil-rich  leftist ally Venezuela, which ships 113,000 barrels a day to  the island at reduced prices.

Opponents of the Cuban government fear that if significant  oil reserves are discovered, it will only further entrench the  communist system and its leaders.

Cuban President Raul Castro, 80, is in the midst of  liberalizing the Soviet-style economy with the goal of assuring  the survival of communism once he and his elderly leadership  group are gone.

The Scarabeo 9, which has the latest technology and is  capable of drilling in up to 12,000 feet (3,600 metres) of  water, was built in Yantai CIMC Raffles Shipyards in Yantai,  China, but  after a number of delays was shipped to the Keppel  FELS shipyard in Singapore last fall for completion.