The US’s great friends China and the Arab League are getting further into bed together. Why? 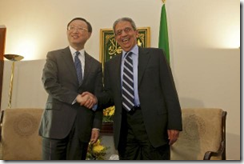 China and the Arab countries decided last year to promote the strategic relationship of cooperation, which marked a new era of bilateral ties, Yang said.

China is willing to join hands with the Arab world to promote the China-Arab Cooperation Forum and deepen bilateral cooperation in all sectors, Yang said.

Moussa said the Arab League is happy to see the progress made in collective cooperation between China and Arab countries in fields such as politics, economy and culture.

The pan-Arab body expected to enhance the level of bilateral ties with the joint efforts from China, Moussa added.

Yang arrived in Cairo on Monday on a two-day visit. On Tuesday, he will meet Egypt’s Supreme Council of the Armed Forces chief Hussein Tantawi.

Of course the West has nothing to fear from closer collusion between China and the Arab world.

They both have our best interests at heart.