But at the same time, Duncan says, the Obama administration is tying the hands of energy producers here at home, by refusing to issue permits that would allow for offshore drilling for oil and natural gas.

“We’ve got the president going to a foreign country and applauding them for what we should be doing,” Duncan said.

The administration has lifted the moratorium placed on drilling that was put into place after the disaster on the Deepwater Horizon rig, which left 11 people dead and blanketed the Gulf of Mexico in oil for months.

But though the moratorium has been lifted, Duncan says new permits are being issued at a glacial pace.

Duncan serves on the Natural Resources Committee, which has been meeting recently with groups such as the Deepwater Horizon Commission, the Bureau of Land Management, the National Marine Fisheries Service and the National Oceanic and Atmospheric Administration.

“The theme on the committee has been ‘How do we get the folks back to work in the Gulf of Mexico back and address rising gas prices in the nation?’” Duncan said.

Duncan believes the administration’s policy on offshore drilling and drilling on federal land is standing in the way of economic development.

“He seems to have a policy of ‘Drill there, not here,’” Duncan said. “We’ve got the resources to meet America’s independent energy needs, through offshore drilling and drilling on federal lands that have been taken off the table.

“We’ve got a president applauding a foreign country for ﻿what we’re not doing, thanks to his policy,” he said. “We need to be tapping American resources.”

Issuing permits to those wishing to drill — who have met all requirements — will lead spur economic recovery, Duncan said.

“I truly believe that energy is a segue to job creation,” he said.

More drilling would benefit not only the energy companies themselves, but a variety of services industries tied to energy-producing areas and beyond, Duncan said.

“We know we have the resources,” he said. “It’s time to put our money where our mouth is.”

Approving and investing in more drilling would also have an impact at the gas pump, Duncan said.

“It would signal to the market that we are serious about American resources,” he said. “We’d see a lessening of the price at the pump.”

That would be a boon to industry and small businesses alike, Duncan said.

“Their costs of business would go down, based on their fuel prices going down,” he said.

Duncan said he is a “huge fan” of nuclear energy, and disagrees with Sen. Joseph Lieberman, who has said America “needs to put the brakes on” building new nuclear plants, in light of the disaster at Japan’s Fukushima No. 1 reactor.

“I say no,” Duncan said. “We need to proceed cautiously, but we’ve been proceeding cautiously for the past 30 years.”

He said residents of Pickens and Oconee counties know first-hand the value of nuclear energy, thanks to Duke Energy’s Oconee Nuclear Station plant.

“You know it’s safe,” he said. “The energy source is stable, it’s consistent. You don’t have the fluctuations in the power grid.”

New nuclear technology will ensure that reactors stay cool in the event of a catastrophe.

New plants can be built with gravity-fed reactors, in which the cooling water is kept above the reactor, Duncan said.

If a power failure occurs, the water falls on the reactors, cooling them and preventing a meltdown.

Plants such as Fukushima No. 1 rely on force-fed cooling, which is why the pumps failed when the power failed, he said.

“The new reactors aren’t going to have that issue,” Duncan said.

Duncan said he believes in an “all-encompassing” energy policy for the United States, including wind and solar power.

“I believe in using it all but I also believe that we have needs that have to be met,” Duncan said. “Wind and solar would provide only a slim fraction of our energy needs. We cannot ignore the natural resources that God gave us, the resources we need to be tapping.” 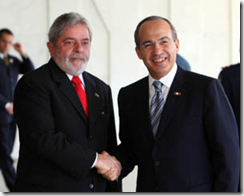 ACAPULCO, Mexico – Mexico and Brazil should form a strategic partnership in the oil sector, according to former Brazilian President Luiz Inacio Lula da Silva, who urged oil monopoly Petroleos Mexicanos and Petrobras to work together to ensure further growth and technological development.

“I dreamed that one day Petrobras and Pemex … might unite, perhaps to create another company to explore other markets around the world,” Lula said Friday at the close of the two-day Mexican Banking Association’s 74th annual conference.

He said this potential alliance should be discussed by the two governments with an eye to exploring for oil “in other regions around the world with more competitive markets and to becoming more competitive, more profitable and larger Latin American companies.”

Lula recalled that Petrobras ceased to be a monopoly in 1997 and became a mixed company with 38 percent of its capital controlled by the state and the rest in private hands.

He recalled that the energy giant raised $70 billion last year in the biggest share sale in history and now is a powerful company whose market capitalization has climbed from $5 billion to $215 billion.

Lula noted that Petrobras is a modern company that has its own research center and makes use of cutting-edge deep-water drilling technology, adding that that is “not the result of luck, but of investment.”

Although Petrobras is a mixed-capital company, the government participates in the company’s decisions and makes sure the country’s strategic interests take precedence, Lula said.

While Petrobras in considered a world leader in deep-water drilling and has made massive ultra-deep finds in the Atlantic Ocean in recent years, Pemex’s output has stagnated due to aging fields and a lack of major new discoveries.

An energy overhaul in 2008 gives Pemex – nationalized in 1938 – more freedom to undertake projects with private firms, which are to be hired under incentive-based service contracts.

But the legislation excludes the provisions of President Felipe Calderon’s original initiative that would have allowed those companies a stake in the oil or any eventual profits.

Lula, a former Marxist who governed as a centrist from 2003 until the end of his term in Jan. 1, 2011, also noted that after no new refineries were constructed for 30 years Petrobras currently is building five.

He also said the company has become a self-sufficient natural gas producer and is working to develop alternative fuels.

Lula said the government must play an important role in the economy and cannot be afraid of private initiative, but instead but establish clear rules of the game for all sectors.

He called on Mexican bankers to arrange business meetings with Brazilian executives to form strategic alliances that lead to the creation of “strong and competitive” new companies.

After comparing the size of the both countries’ economies and bilateral trade flows, the former president said there is “something wrong in (bilateral) relations.”

Lula said it is disappointing that total bilateral trade amounts to just $7 billion annually and challenged the two countries to adopt a more daring trade policy.

He also urged Mexico, which is heavily reliant on trade with the United States, to look more to strengthening relations with South American nations.

Regarding the global financial crisis, Lula said it is still not over and that it is necessary for world leaders to remain vigilant.

He also said the G-20 group of major economies must take measures to prevent banks from falling into financial problems, strengthen government oversight and bar financial entities from lending money they don’t have.